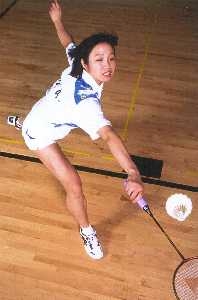 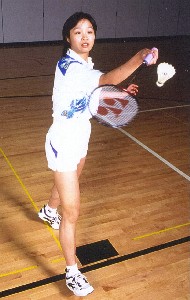 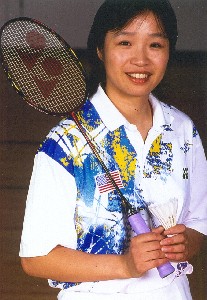 from US Open Literature

In this age of 15-year-old Olympic champions in many sports, Yeping Tang is truly a veteran. At 27, Tang is old enough to have had two lifetimes in the sport of badminton, which in fact, she has.

Tang's first life began in her homeland of China, where at the age of 12, she was discovered. A national team coach was canvassing the country looking for promising young badminton stars when he happened across Tang playing in her elementary school gym class. Her speed, quickness, height, and disposition caught his attention, and after a short trial, Tang was asked to move from her home in Shao Xing and travel to Jheng Jing where the state team resided.

It was the early 1980s, and China was in the midst of its emergence on the sporting scene. Following its creation in 1'949, the People's Republic of China placed great attention on the development of sport in the country. More than 560,000 sports facilities of various types have been built since 1950, and thousands of young athletes, like Tang, have been asked to compete for their country.

Despite her excellent play, as Tang matured into her early 20s, she found herself too old to compete as a junior but not yet strong enough to play in the older ranks. In 1991, at the age of 20, Tang left the state team program, hung up her racket, and returned home to be with her parents.

"China has so many good players, once you're over 20, you're too old to play," explained Tang. And thus ended her first life in the sport.

After three years at home working odd jobs and not playing badminton. Tang came to America in 1994 to visit her husband. What began as a short trip became permanent as she moved to Maryland and applied for U.S. citizenship. She left her parents and sister behind in China, but knew it was the right decision.

"There are opportunities here. My husband is here. It was right to move here," said Tang.

There is also badminton here, though a very different badminton than Tang was used to back in China. Once she was settled stateside, Tang began playing at a local club in Maryland for fun, but quickly realized her skill level was high enough to once again compete on the national level. Tang played in a few national events as early as 1996, started moving up the U.S. ranking in 1997, but has truly broken through in 1998, capturing the first-place ranking in both women's singles and women's doubles. Most recently. she won the triple crown at the 1998 K & D Graphics U.S. Adult Nationals, taking first in women's singles, women's doubles, and mixed doubles.

"I knew the triple crown was possible if I played well, so I just went out and did the best I could," said Tang of her accomplishments at the April event.

Using her feats at Adult Nationals as a springboard to the 1998 OCBC/Yonex U.S. Open, Tang is ready to take on all comers in California. She will be balancing her training schedule with her full-time job where she organizes international mail deliveries for an American company. For Adult Nationals, Tang escalated her cardiovascular fitness by jogging in addition to playing badminton two to three hours a night; she will be employing similar tactics for the Open.

"I'll keep working on my fitness and play as much as I can," said Tang. "Like Nationals, I'll go out and do my best."

Tang's focus at the Open will be on women's doubles with partner Cindy Shi. She will be working to improve on her only other Open showing from 1 996 when she lost in singles in the early rounds. Tang was unable to compete in the 1997 Open due to a persistent leg injury.

"Even though the Open is just a one-star event this year, the players are going to be even stronger than at U.S. Nationals," explained Tang. "With the strong international competition, my goal is to make it at least to the quarterfinals."

Regardless of her showing at the Open, Tang intends to take full advantage of her rebirth in the sport. She is looking forward to the 2000 Olympic Games in Australia, and is intent on making the U.S. team in perhaps all three events.

Without question, there will be a large contingent of top Chinese players awaiting her in Sydney. Currently Chinese players hold five of the top six spots in the official IBF ranking, with only Denmark's Camilla Martin breaking in at number two.

Only time will tell what Tang's future will bring, but for a woman who went from leaving the sport all together to obtaining a number one U.S. ranking, anything seems possible.